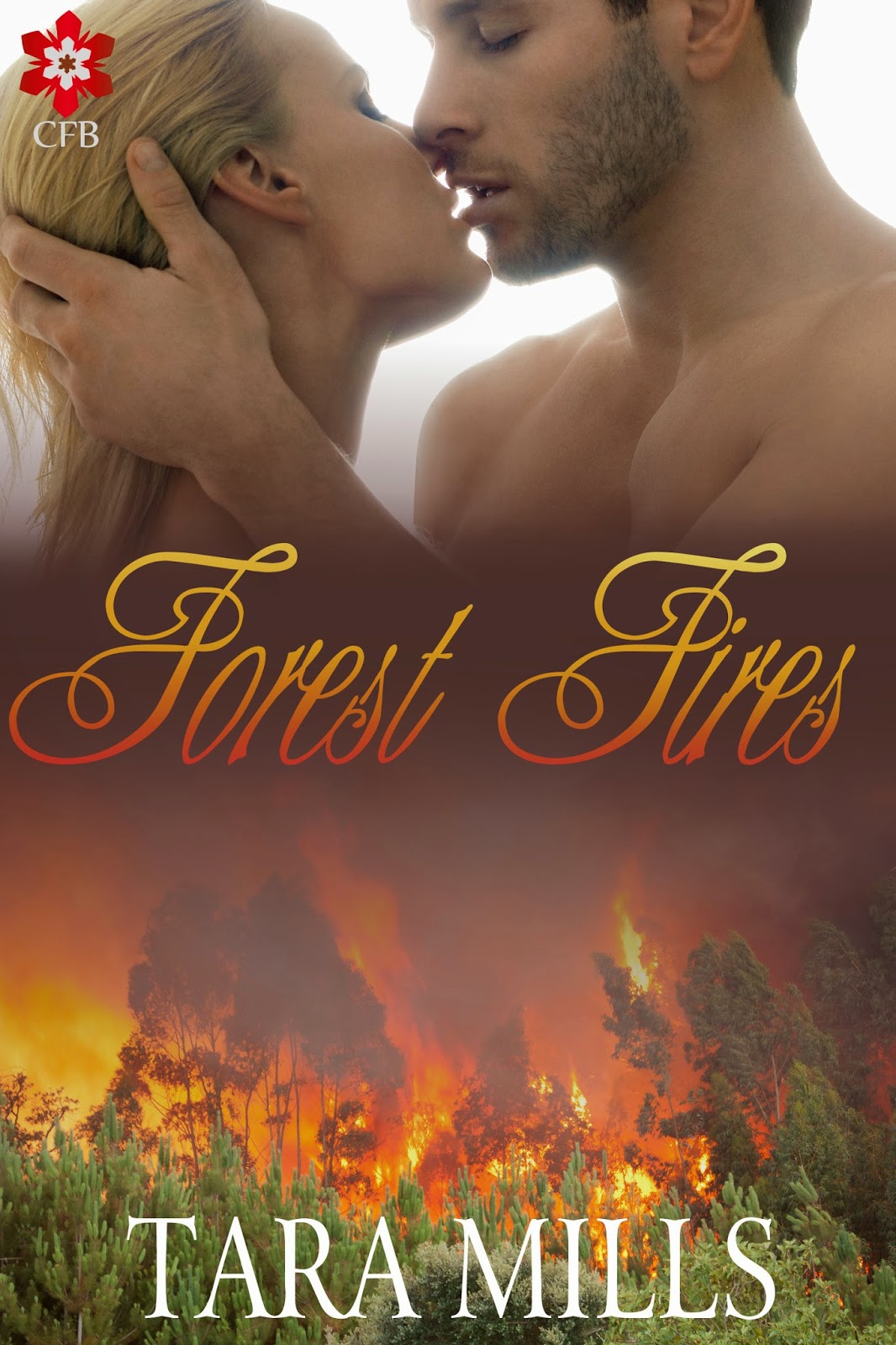 4.0 out of 5 stars Another Fantastic Novel by Tara Mills! January 4, 2013
By Erin Richards
Format:Kindle Edition|Verified Purchase
The first chapter of FOREST FIRES sucks you in and doesn't let go. Ms. Mills' successfully sets up the story from page one when Drake has a flat tire and Charley stumbles across him on the highway. Drake is returning to the small town and cabin where he spent his boyhood summers, the place Charley calls home. Sparks fly and the adventure begins!

I got a kick out of the role-reversal with Charley as a handywomen and Drake a scholarly wildlife biologist. It creates great tension between them when Drake needs a helping hand at his rundown cabin. Charley doesn't trust due to having been burned before in love, and Drake's all too willing to be the man to help her overcome her distrust. When the two get caught in a suspenseful and gripping escape from a raging forest fire, their relationship starts to sizzle (literally!). Down to the last page, I didn't know how they would reach their happily ever after when Drake is only in town for the summer. But Ms. Mills' wraps it up beautifully and the ending was real and satisfying.

I loved Tara Mills' first novel CAUTION: FILLING IS HOT and was excited to read FOREST FIRES. Tara Mills has a flare for injecting humor into her stories in just the right places and in the right amounts. I love her writing and story-telling ability, and I highly recommend both books. Tara Mills is now on my instant buy list.

4.0 out of 5 stars Hot November 1, 2012
By LK reads
Format:Kindle Edition
Terrific heart pounding action sequences and sizzling romance. This reader hopes Tara Mills' Forest Fires' is as close as I come to the real thing. I received and ARC in exchange for reveiew
Comment |
Was this review helpful to you?
Yes
No
5.0 out of 5 stars A Great Read! October 22, 2012
By K. King
Format:Kindle Edition|Verified Purchase
Tara Mills has created the best Sunday afternoon entertainment I've experienced in a long time. The story had everything; characters you can love, laughter, danger, and a powerful amount of sexual magic.

Charley Jenson loves her life as an all-around handywoman in a Maine resort town. She loves the wilderness and after a disastrous relationship with a cheating boyfriend, she has no intentions of falling for one of the summer visitors, even if he is different. But Drake Carver, a wildlife biologist who is in the area to study waterfowl, is almost a native, having spent his childhood summers in his family's cabin on the lake, and he's a darned nice guy to boot. Even though Charley can't see a future with him because of their differences in upbringing and education, she falls for his caring ways and his habit of making her feel like a cherished equal.

I found myself falling in love with Drake (who wouldn't fall for an ornithologist who sheds tears over a dead baby loon?) and cheering for the hard-working Charley, who deserves every bit of happiness she gets.

Do yourself a favor and dig into this book one day when you want to meet a man you can really fall for, and a woman who deserves him.
Comment |
Was this review helpful to you?
Yes
No
5.0 out of 5 stars A First Rate Read! October 22, 2012
By Galen Rose
Format:Kindle Edition
Tara Mills has a gift for words and it shines through in Forest Fires. Charley is a handywoman and is quite capable of taking care of just about anything. Drake is a biologist who finds out pretty quick that the mountains can be unforgiving if you are not prepared for anything. Though they seem mismatched, there is no mistaking the attraction that burns hot between them. There is even an escape from a raging forest fire that will have you biting your nails as Charley and Drake run for their lives. I enjoyed this book from beginning to end and look forward to more from this author!
This reviewer received an ARC from the author in return for an honest review, which is given as a professional courtesy and without monetary compensation.

4.0 out of 5 stars Mismatch Made in Haven,
By
peggy bird - See all my reviews
This review is from: Forest Fires (Crimson Romance) (Kindle Edition)
The first chapter of "Forest Fires" is one of the best first chapters I've read in a long time. It drops the reader into the story quickly, draws in bold strokes the two main characters and sets them on the path to the adventure Tara Mills has set up for them!

Drake Carver has returned to the cabin where he'd spent his boyhood summers to work on a contract for Fish and Wildlife. He's a wildlife biologist--an unusual occupation in romance heroes--and will be spending the summer studying the birds in the area. Charley Jensen is a handywoman who has lived in the area all her life and who is about as girly as the lug wrench she loans Drake when she first meets him on the road where he's had a flat tire.

It's a role-reversing, gender-bending mismatch made in heaven. Or, in this case, Haven, which is the name of the small nearby town.

When Drake needs some help with a couple projects at the cabin, I'll give you one guess who the handywoman is who takes the job. And when Charley wants company on a hike to a breathtaking piece of scenery, who do you think she invites to go with her? I'll give you the same single guess.

It's on that hike that a wildfire traps the couple. Mills' description of their climb out of the danger zone is nail-bitingly good. As is her portrayal of the tension between them as each comes to terms with the growing attraction between them.

But Charley has been burned before and isn't sure she wants to trust him, a man who is as far away from what she thought she liked as possible. And he knows she's not the kind of woman his socially conscious mother would like him to marry. On top of that, his work will be over at summer's end and he'll be leaving the cabin. So, Charley breaks it off before he breaks her heart. But Drake has a surprise up his sleeve that just might help her see their differences aren't important although being together is.

I was fortunate to read an advanced copy of "Forest Fires" and have reviewed it as a favor to the author. If you're smart, you'll buy this book as soon as it's available October 15th. I'll bet you agree that I was lucky to have been among the first to read it. And also download a copy of "Caution: Filling is Hot" by the same author. It's another good read.

5.0 out of 5 stars Fired up!,
By
Cary Morgan Frates (Redmond) -
This review is from: Forest Fires (Crimson Romance) (Kindle Edition)
Oh, this was good! Tara Mills takes us on a fun adventure through mountains and forests and breathtaking views, but all those pale in comparison to the strength of her characters and her storyline. I found myself right there beside them for every electric moment, whether contentious, high altitude, or heart-stoppingly dangerous. While the hero's profession is, at first glance, a brow-lifter for those anticipating a hunky alpha male, he does not disappoint . . . not a bit. The heroine is strong, capable, and fiercely independent, and following her route to self-discovery is pure delight. Well done. This reviewer received an ARC from the author in return for an honest review, which is given as a professional courtesy and without monetary compensation.

5.0 out of 5 stars A Page Turner!,
By
DOC "Deborah" - See all my reviews
This review is from: Forest Fires (Crimson Romance) (Kindle Edition)
Well done, Tara Mills! I read FOREST FIRES in one sitting - it's a definite page turner. The novel ran like a movie in my head, because Ms. Mills has an excellent visual writing style. I grew up in the mountains of Arizona, and I immediately identified with her description of the environment around Haven. Her keen ability to get into the heads of her characters should also be praised. All of her settings, townspeople, and her heroine, Charley, rang true. I loved the fact that Charley hadn't worn a dress or heels in years! And she nailed her biologist-hero, Drake, although I must admit I never met a hunky ornithologist like him when I was in college. :) The scenes where Charley and Drake must escape from a mountain during a raging forest fire were so harrowing, I could not put down my Kindle (appropriate name, eh?). The world fell away and I was there, smelling the smoke, feeling their pain, and gripped with fear. Kudos to Ms. Mills for creating a suspenseful read. This reviewer received an ARC from the author in return for an honest review, which is given as a professional courtesy and without monetary compensation.