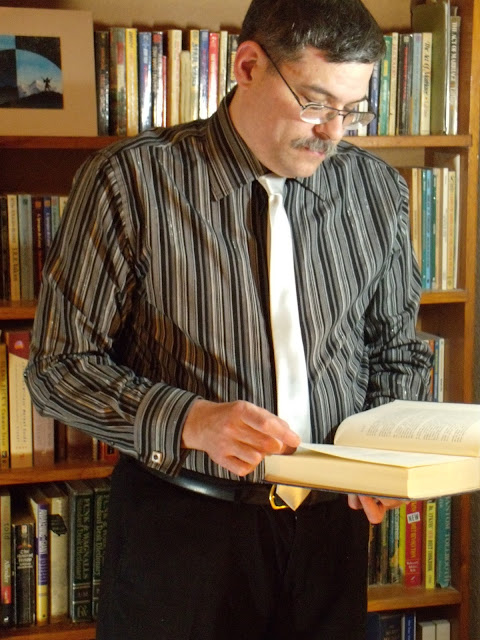 What made you want to write?
I've always been a voracious reader and interested in stories. My first paycheck was a sort of choose your own adventure book for a game called Tunnels & Trolls back when I was 16. But I never really tried to write professionally after that until about 12 years ago. At the time I hated my job and figured it was a was an easier way to make a living. (My mistake!) My first novel Maitre'd to the Damned is somewhat autobiographical on this point. The character's hatred of being a restaurant manager (which I was at the time) drives him to do a deal with some Gothic gangsters that doesn't end well, for anybody.

How long have you been writing fiction?   Do you write anything else?
About twelve years. I've also written articles on paranormal subjects, philosophy, religion, politics, conspiracy theories, and role playing games. Some of these were printed in magazines like Challenge and Weird Tales,  while the others are available Indie published as e-books on sites such as Smashwords, Barnes & Noble and Amazon. My fiction revolves around those sorts of topics, too. It's not the typical genre boilerplate. That's probably why it's been difficult for me to find publishers in spite of winning an award for one novel and having pretty good sales on Amazon for my self-published works.

What is your preferred genre and why?
Speculative fiction because I love to speculate. What if...? Is a great way to begin a story. You can never predict where it'll take you. It's never dull.

Where do you get ideas from regarding characters and or plots?
A lot of them are historical. I'm a real history buff, especially World War II. Many of the characters in A Priestess of Mars (available from CFB) are historical figures. Bill, the love interest of the Priestess, is a real person whose wife died as it was described in the book. How I had him react to it was fiction, but he's real, as well as Scheer the German captain. It seemed reasonable if Germany made a steam-powered spaceship in 1907 that they'd have one of their best captains commanding it. And, of course, Aleistar Crowley is historical. He probably wouldn't like the way I portray him, but he really was a womanizing skunk. A lot of people don't know he was suspected of being a German spy during the First World War.

What is your muse?
Usually the thing that drives me is that "What if...? I'm a big fan of the Twilight Zone, Outer Limits, and all those old cheesy monster movies. I like time travel and alternative history - what if - stories. That pretty much defines what I write. Even the non-fiction often looks at alternative explanations for reality. My favorite questions are "why?" and "why not?"


What other interests do you have that you would like to share with your audience?   I am very interested in military and role playing games. Back in the 1990's I used to own a shop that sold Dungeons& Dragons and other such games. I still make and sell similar games on-line including running some play-by-e-mail games off my web site. They're sort of like role playing games you play over the internet, although not like World of Warcraft - Mine are more text and spreadsheet based than just fancy graphics and psychological tricks to keep you mindlessly clicking on things for hours. Probably why I have a very narrow but deep fan base for my games. Some of them have been playing my games for twenty years.

My MFB novel Cannibal Planet grew directly out of role playing adventures I ran for the old Traveller science-fiction game. As did my vampire novel, Maitre'd to the Damned, which I originally produced as a role playing adventure for Challenge magazine's annual horror edition. It was rejected by the editor as being "too horrible" (and she didn't mean the writing) so I rewrote it as a horror novel. It's still horrible, but in a good way.

What type of music do you like?
Blues. I usually listen to that while I write.

Do you like to dance?  What other art forms are you interested in?
Not so much. And poetry is usually wasted on me unless it involves rhyming the word "Nantucket."

What are some of your favorite movies or books?
Pretty much anything if it has a good story. I'm a particular fan of the old 1960s Hammer horror films. That was back when religion and philosophy could be mentioned in films. Nowadays it's too politically incorrect. Back then a struggle with a vampire was a spiritual struggle. To win, you needed to resolve the doubt in your mind. You needed faith. Today you just need a better vampire. I did a blog post on this topic once upon a time that's still up on my web site: www.MEBrines.com.

Is there anything else you would like your audience to know about you?   What makes you special?
"Special" is a strange word these days. They say everybody's special. And if that's so, then I'm not, because I'm not really like anybody else. I'm a devout Christian who doesn't go to church, a very scientifically-minded thinker with a business degree who spends his time writing romances and books about philosophy and religion. The last time I danced was at a friend's forest wedding presided over by a Wiccan priestess. (And yeah, we were all wearing clothes. It's really cold in the mountains in the winter even in Arizona.) My best selling book, The Queen's Martian Rifles, got 5-star reviews from Gnostalgia, a Gnostic web site, as well as from Christian Sci-fi and Fantasy Review on-line. That's like having Dan Brown and the Catholic Church both like your book. I'm so unique I probably ought to be endorsing Dos Equis beer.

What is your next book or books with us?   Tell us about them.
I'm currently working on The Sorcerer's Bride, an epic fantasy romance. The tag line is "Nobody expected her to survive the honeymoon."

I'm also working on "The Red Pill" the ultimate non-fiction book on conspiracy theories. The blurb for that book goes:

"Are conspiracy theories intrinsically absurd? Or have they existed (and been successful) since ancient times?Does a cabal of evil financiers dominate Western civilization? This book examines the how and the why, investigating the relationship of modern politics and ancient religion, revealing who “they” are and their plans for your future. How do the illuminati, UFOs, the Masons, ancient religious texts, Nazis, Star Trek, medieval gnosticism, modern political primaries, Wicca, the Federal Reserve system, the Mormon Church, Hollywood, Islam, Global Warming and an obscure novel published in 1912 relate to each other? Does an originally secret 1960s sociological study reveal the Insiders’ plans for YOUR future? What is the sinister secret revealed by the Georgia Guidestones? Who will fight World War III and how will it end? What is the truth behind the Roswell Incident and the government’s relationship to extraterrestrials? How does understanding this conspiracy reveal the key to achieving happiness in your personal life?"

With that kind of blurb, the author's either a genius or insane, maybe a little of both.

Incredible interview with a very interesting author!  M.E. Brines seems to be a fascinating author.  I am looking forward to reading his work.  I truly enjoy the titles he selects for his books.  They pull you into wanting to know what they're about. We hope you want to know too!  And you will!  Stay posted and enjoy his upcoming works both will be available on Crimson Frost Books and Midnight Frost Books.

Thanks for reading,
Celeste and Patricia, Publishers