Diane is an interesting artist who loves animals!


What made you want to write?
Well… to tell the truth, I didn't really consider writing a book until later on in life.  However, when I was a kid, creative writing classes were fun.  I liked doing book reports on any sort of topic.  From there it sort of just percolated upwards and when I actually had a chance to participate in a yearly writing challenge called the National Novel Writing Month in November of 2003, I actually figured out that I could put all my stories onto paper or in a computer file and really have fun doing it.
How long have you been writing Fiction?
It seems like forever.  I don't really know when I actually started officially writing fiction, because there's always been one or two story lines running around in my head. :D

What is your preferred genre and why?
Oh, that's easy. Paranormal Action and Adventure with a Romantic tweak/twist involved.  Why?  Well, how many genres can you take even the smallest, most insignificant thing in your life and turn it into the most important key to unlocking the gates of whatever demon realm you can come up with, and thereby ending the world as we know it.... and it's in a silver locket fastened around a neck of a woman who specializes in explosives and assassinations.  And the only person the Powers that Be can send to… *snicker* Protect this woman *giggle* is a Werewolf who thinks his target is going to instantly fall under his spell...


And that is just an idea.... Imagine the chaos that ensues.
What is your muse?
*chuckling* My muse is this mysterious being that I swear can change gender at any time.  And it's got an even more twisted sense of humor than I do when it comes to working with characters and plot lines. LOL
What other interests’ do you have?  Tell us who Diane is.
Well, I'm sort of an eclectic. I LOVE to read, but I also like crocheting and knitting.  Sometimes, I like to grow herbs if I have the place for it.  Other times, I really like to take a city bus and go somewhere I've never gone before.


On the more active side, I'm a member of the Society for Creative Anachronism... SCA for short. It's a Medieval re-creation group that does just that... re-creates the Middle Ages without all the unpleasantness...  :D You can find them at http://www.sca.org   It's a paradise for people who love history.  You create a persona, do Heraldry, and there's a lot of the old arts and crafts that are kept alive by people who love doing research and taking the time to learn the Old Ways.
I also am a confirmed addict of Tattoos.  Piercings are another matter... but tattoos... when I get the money, I do try and find a way to get at least one.  And I'm running out of room. LOL.
As for who I am... most of the time, I'm just a quiet person who is mostly a hermit who keeps in touch with people via the Internet.  I'm the person that is usually found in the corner of the library with her favorite books around her, either reading or doing research for the next story.
What type of music do you like?
Anything but Rap and Country.
I've had enough of the profanity laced lyrics you hear these days from Rap... Okay, I shouldn't lump ALL rap into one big thing, but still.
Country, *grabbing ear plugs* I can't stand it.  Unless you're talking about Kenny Rogers, Jerry Reed, or someone like that… fine... the rest... lock ‘em up in a room and toss the key.

What are some of your favorite movies?
*chuckling* Oh just some, eh? I'd be taking up an entire page of movies if I had to list the all.


Basically, I like action adventures, Sci Fi, and the occasional Romance... but the romance HAS to have action with it... otherwise I lose interest really fast.

Is there anything else you would like your audience to know about you?
I'm an animal lover.  Most of the time, strays find their way to me and I'm such a sucker for big wide eyes and a whimper or a mew... I try to take care of them.  BUT… I am an avid believer that if you are a responsible pet owner and don't plan on breeding your dog or cat, GET THEM FIXED.


There are too many abandoned animals on the streets today because of people don't want a female cat or dog who suddenly presents them with puppies or kittens because they got out during 'that time'.   Please, be responsible and cut down on the stray population wherever you are.
What is your next book and when do you expect it to be published?
My next book is Mystique Rogue.  It's a paranormal romp with a Celtic/Ancient Egyptian twist.  It's a story that delves into the realm of Illusion and what is real and what is just a trick of the eye that the Illusionist wants you to see.
As to when I expect it... *smiles* whenever my esteemed editor and publisher deem it a priceless gem to be put on display for the masses. *evil grin*

It was great to get to know Diane, she has a multifaceted personality which one can see in her writing.  Stay tuned for her next book out with Crimson Frost Books Mystique Rogue.
Thanks for reading our blog,
My dog Papi, says thanks Diane for loving us and taking good care of our needs. We need more pet friendly people in our world; 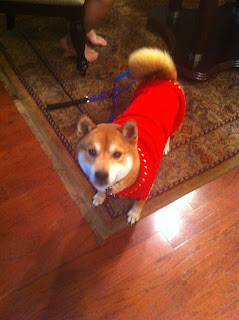